At a time when the dark ages were coming to an end in Europe, Bukhari was busy writing his Sahi and Ibn Hanbal was writing his Musnad; was born in 232 AH in Madina Imam Hasan ibn Ali to Imam Haadi (pbuh) and Sayyida Saleel. The Banu Abbas were fearful of the advent of Al-Mahdi and were aware of the hadith of Rasulullah (pbuh) of him being the 12th in succession. They exiled Imam Hadi and his family to Samarra when Imam Hasan Al-Askery was an infant.

Imam Hasan Al Askery strengthened the network his father had built of representatives in Egypt, Iraq, Persia, Yemen, and Syria which allowed the collection and distribution of Zakat and Khums. His twenties was a time when the shrines in Karbala and Najaf were destroyed and then re built when the Khalifa Muntasir took over from his father Mutawakkil. He was detained and placed under house arrest several times. When the circumstances were less harsh, he received delegations from all over the world. Imam was the first to systematize the writing of Tafseer. His system has been emulated by all scholars up to the present time. He commented on the Sura, then commented on the Ayaa, then each word giving its several possible meanings.

Even those who held enmity against him said: “I do not know of anyone who is more distinguished than Al-Hasan Al-Askari. None can surpass him in dignity, knowledge, piety, and forbearance, Nor can anyone match him in points of nobility, majesty, grandeur, humility, or honesty.”

Imam married Sayyida Nargis (a Roman Christian princess who embraced Islam) and Imam Al Mahdi born in 255 AH. His Salaa ‘alal Mayyit was led by Imam Mahdi who moved aside his uncle Ja’fer. Imam was buried in the house in which his father was buried in Samarra. 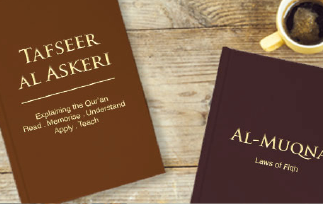