Imam was born in the village of Sarya on the outskirts of Madina in Rajab 212 AH. Like his father he assumed responsibilities at a young age. His wealth of knowledge and his character made him popular among the general public.

Imam Haadi (pbuh) used Masjidun Nabi in Madina as his base where he taught. He became popular amongst the residents of Madina and those from surrounding places who visited and came to study under his guidance.

Ziyara Jamia is attributed to him as a response to one of his companions who had asked to be taught a dua he could use when visiting the grave of any one of the Aimma. Mutawakkil (the Abbasid Khalifa) feared Imam’s popularity and summoned him to Samarrah with his entire family where he spent the rest of his life preparing for the ghayba of Imam Mahdi (pbuh). Imam died at the age of forty in 254 AH. 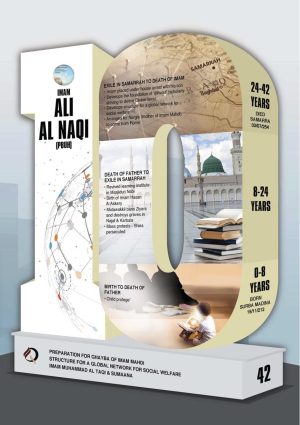