The most perfect student and successor of the Prophet (pbuh), Imam Ali (pbuh), son of Fatima bint Asad and Abu Talib (the uncle of the Prophet), was born in 600 AD in Makka in the Kaba. His life can be looked at in 3 phases: 1st-phase: Childhood to the death of the Prophet 2nd-phase: From the Prophet’s death to his rule 3rd-phase: Khilafa to martyrdom.

23 years of struggle for the establishment of an Islamic System. The first person to have accepted Islam, he showed unflinching faith in Allah and His messenger. Under the mentorship of the Prophet who was also his cousin and father in law, he was his most trusted companion, hero of all the battles and an impeccable human being. Ali was always by the Prophets side, and thus the Prophet likening his position to that of Harun to Prophet Musa. He married the daughter of the Prophet, Sayyida Fatima (pbuh) in 623 AH and they had five children. In 10 AH, the Prophet took the Muslims to what is known as the farewell and on the way back stopped at a place called Johfa where aya 5:67 of the Quran was revealed. Oh Messenger, Deliver what has been revealed to you from your Lord; and if you do not do, then you have not delivered his message, and Allah will protect you from the people, surely Allah will not guide the unbelieving peopleHe declared the successor ship of Imam Ali by saying: Whoever I am the Master of, then Ali is his Master.

25 years to preserve Islamic Unity Historians have recorded that after the death of the Prophet, Imam Ali chose not to pursue his right as the successor of the Prophet in order to prevent civil war with the self-appointed government as he was more concerned with preserving the Prophetic message and unity of the Umma. He became the fourth Caliph of Muslims, after the tenures of Abu Bakr, Umar and Uthman.

5 years of struggle to establish Social Justice In 35AH the Muslims, having got fed up of all the injustices urged Imam Ali to accept leadership and took the oath of allegiance. He devoted the entire period to implement social justice and to uproot the class system that had crept in after the death of the Prophet. He was constantly opposed by prominent figures throughout his khilafa for his attempts to rule in line with Prophetic traditions and was eventually murdered in the Mosque of Kufa by Abd al-Rahman ibn Muljim who struck him on the head with a poisoned sword whilst he was in sajda. He died on the 21 Ramadhan 40 AH at the age of sixty three and is buried in Najaf, Iraq.

“Tomorrow you will look back to my time and my innermost thoughts will be revealed to you. Then you will recognise me after I have left my position and another has taken mine.” 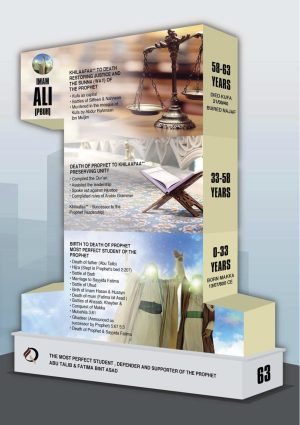